In 17 years as a professional dog trainer, I have only once publicly called out another dog trainer.  One time in 17 years.  It was regarding a public news story and severe abuse and I did not conceal their name of the trainer in a blog post I wrote discussing it.

Today it will now be 2 dog trainers.

After MUCH consideration and counsel from the individuals involved in these comments and trusted advisors, we determined to not conceal the name of the trainer who made the original post or the comments in response to our comments.  We felt he was clearly proud and public about his stance, so we chose to let it remain unfettered.

It started this morning at 7:15am ish local time.  A well known dog trainer posted on both his professional and person page the following post:

23 minutes after that post, I received a PM about it and then the following comments ensued within the original post(s): 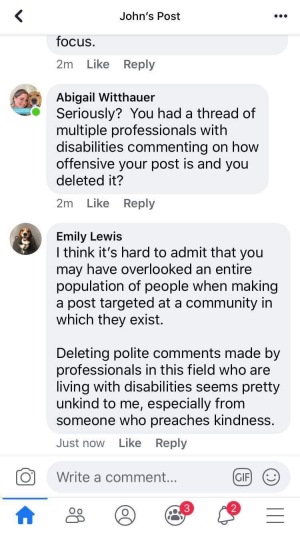 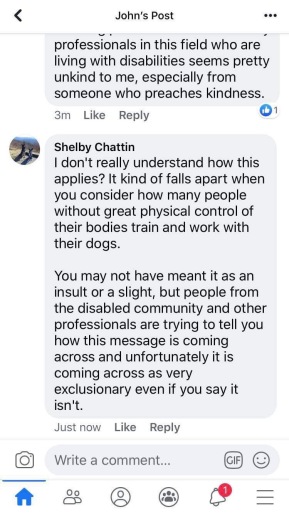 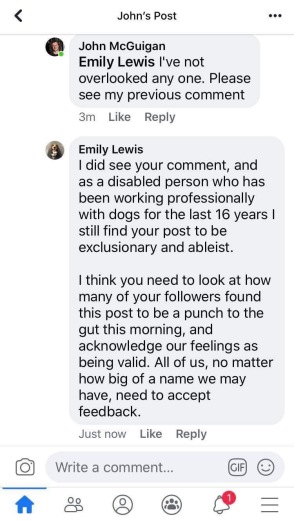 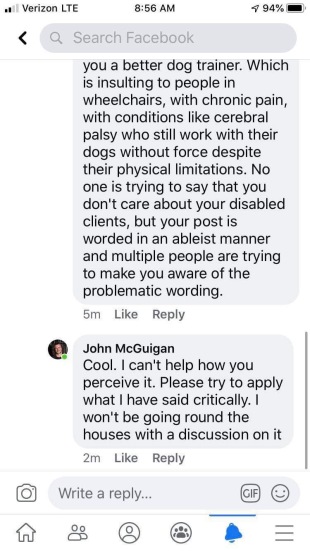 All of these comments were deleted by Mr. McGuigan as they were occurring.

In full transparency, I have never met Mr. McGuigan.  I have never heard him speak.  I have commented on a public post of his less than 5 times over the years,  The only individual interaction we have ever had was based on this random PM I received from him earlier this year:

Everyone, every single human being, has prejudice.  Our goal should always be to listen to individuals within a group when they try to educate us on our opinions and actions surrounding that group based on insufficient knowledge.

That is what was done today.  That is what Mr. McGuigan censored, manslpained, and ignored as large group of individuals with disabilities tried to educate him on ableism and disability.

As an able bodied person, it is absolutely well outside of Mr. McGuigan’s lane to tell an individual with a disability, how they should feel about a post discussing physical strength.  It is unacceptable that, when voicing concerns about an ableist viewpoint, Mr. McGuigan say that they are “missing the point”, “not thinking critically”, “not being imaginative”, “not being overlooked”, and “derailing” the conversation.

You, Mr. McGuigan, will not silence the disabled women who laid the ground upon which you walk in this industry.

You sir, will not delete us.

EDIT 11/18/19:  It appears Mr. McGuigan did issue an apology on his personal and professional page.  However, I was unable to see that directly due to my blocked status and it was not sent directly to me or any of the others involved directly.  That posted apology appears to then have been removed after approximately 24-48hours.

8 thoughts on “Dear John… Ableism is everywhere… Even dog training.”